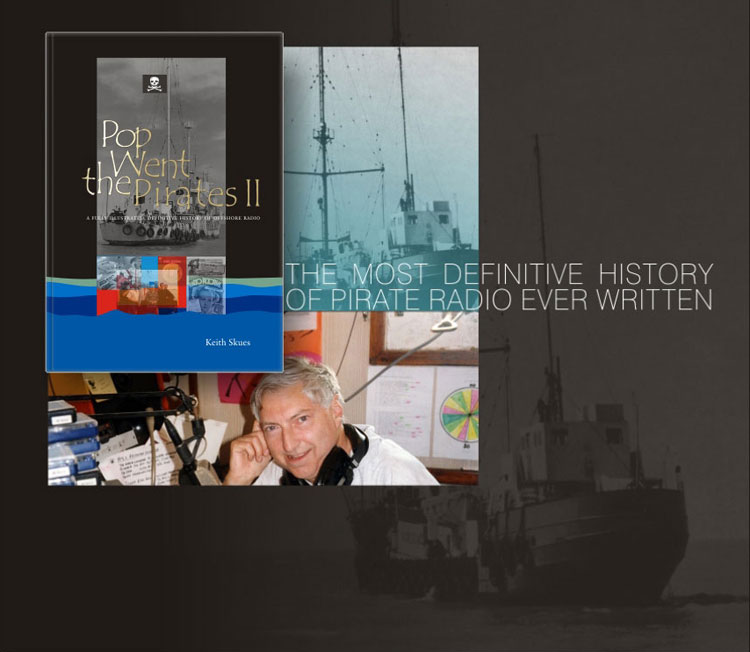 TO PRODUCE THE definitive history of pirate radio and pirate radio ships is a daunting task.
Pop Went the Pirates II sets out to achieve this with a comprehensive account from the earliest pirate radio stations in the 1930s up to the present day and takes in reunions and celebrations that have taken place since in England, Holland and the United States of America since the Government outlawed the offshore radio stations in 1967.

This outstanding volume is the product of 45 years painstaking research by the author, Keith Skues, who has been involved in sound broadcasting throughout the period. The informative text is fully illustrated with nearly 300 black and white photographs of the pirate ships, DJs, and performing artists - many of which have never previously been published. Photographs of DJs who appeared on Pirate BBC Essex in August 2007 and Easter 2009 are included, and there is a section on The Boat that Rocked.
Delve into this tour de force to find out all about the ships and forts which played such important roles in changing pop music and radio broadcasting into the format which exists today. DJs and executives of many stations, both large and small, recount their involvement in the pirate radio saga. Read detailed accounts of the debates in Parliament which led to the demise of the pirate radio stations. The philosophy behind Radio One, the BBC’s answer to pirate radio, is examined by former controllers of the Network.
In order for the reader to easily locate any specific pirate radio ship, fort, personality or event, a full index has been compiled.

Pop Went the Pirates II available from Lamb’s Meadow Publications. It is only available in hard back format at the special price of Ł20.00 plus £6.00 UK postage and packing (£26) - Postage and packaging Europe £11 (£31)

Copies can be obtained from Lamb’s Meadow Publications, Seekers End, 19 Parkland Crescent, Horning, Norfolk NR12 8PJ. Cheques should be made out to “R.K. Skues.”